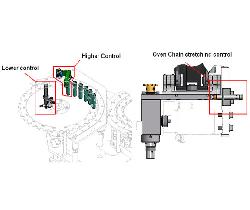 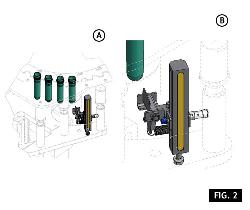 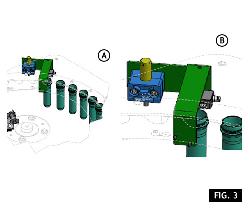 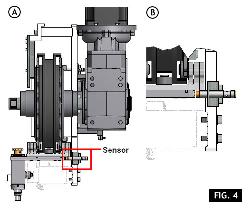 This upgrade consists in the integration of some functional controls of the blow-molding process.

The kit includes some new control systems, in order to improve the blow-molder performance, and a new software version for the new functionality.

The first control is the Preform release lower control (Picture 2A); by means of a proximity sensor and a mechanical device (Picture 2B), this control detects the preforms not correctly transferred by the infeed star, thus preventing them from entering the blowing station, which would cause a stop in emergency due to a wrong delivery of the preform into the mold.

The other control is the preform release upper control, which checks the correct positioning of products onto the preform star, thus detecting any product badly positioned onto the star which would cause errors in the mold-holder/bolt closing due to wrong picking by the preform grippers.

This check is possible thanks to a photocell (Fig. 3A and 3B) installed on a mechanical support; when this photocell detects a preform in wrong position, the preform will be rejected before entering the blowing station.

The last control included in the kit does not check the product during the working phases, but is aimed at protecting the oven chain duration, by monitoring its physiological stretching.

The new system features a software, equipped with the sensor represented in Pictures 4A and 4B, which detects the deviation of the preform release mandril from the optimal position and corrects this deviation by slightly varying the driving motor position. This is an important innovation, because it reduces the chain maintenance costs.